At a critical time when West Virginia should be working to restore confidence and trust in our state Supreme Court, shadowy organizations that want to use the courts to further their own political, ideological, or financial agendas are back to their dirty tricks — trying to manipulate and sway voters with nasty, misleading attack ads.

Ironically, this historic election, in which we will elect an unprecedented three out of five justices to our state’s highest court, falls one day after the anniversary of the US Supreme Court’s decision in Caperton v. Massey (June 8). For those who aren’t familiar with the case, it all started with a coal baron named Don Blankenship, who at the time was CEO of Massey Energy.  In 2004, Blankenship spent more than $3 million to elect his preferred candidate, Brent Benjamin, to the WV Supreme Court of Appeals, while his company had a $50 million judgment against it pending on appeal to the Court.

Justice Benjamin went on to be the deciding vote, twice, to overturn the lower court verdict against Massey. This led to the plaintiff in the case, Hugh Caperton, to appeal to the U.S. Supreme Court, which ultimately ruled (in 2009) that Benjamin should have recused himself from the case because Blankenship’s support posed a risk of bias in the case.

Unfortunately, more than 10 years later, neither the Legislature nor the state Supreme Court have tackled the erosion of the public’s confidence in the Court as a neutral and unbiased arbiter, and the resulting perception that interested parties can sway the court system in their favor. These systemic issues, which were exacerbated by the 2018 spending scandal that pushed trust and confidence in the judiciary to an all-time low, could be addressed by strengthening disclosure of political spending and the adoption of a strong, objective recusal standard.

This moment is an opportunity to bring greater trust, accountability, and transparency to the judiciary, but rebuilding trust in the judiciary cannot end with a single individual. As voters, it’s incumbent upon us to seek out unbiased information about the candidates rather than relying on misleading, inaccurate attack ads. That’s why we partnered with the WV Consumer Protection Alliance on a voter education website, https://www.wvcourtelections.org/, where voters can learn more about the Supreme Court candidates in their own words. The League of Women Voters of West Virginia also has a non-partisan voter guide, which can be found at https://lwvwv.org/ along with candidate information compiled from various media outlets.

The court and legislators must also seize this opportunity. To begin to rebuild trust in the West Virginia judiciary, we must shed light on the money that is being spent behind voters’ backs to influence our elections, and remove conflicts of interest from our courts by adopting an objective recusal standard.

Julie Archer is Coordinator of WV Citizens for Clean Elections. A version of this commentary was published in the Charleston Gazette-Mail on June 2, 2020. 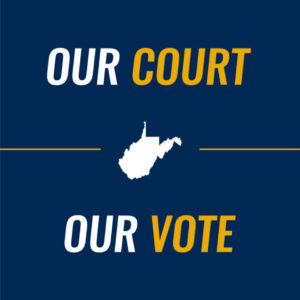