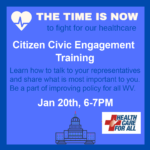 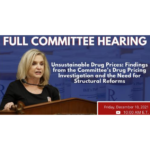 Blog Eve Marcum-Atkinson December 9, 2021
MEDIA ADVISORY: Mindy Salango Rx Drug Congressional Testimony – Dec. 10th at 10AM
Local resident Mindy Salango, who is a Type 1 diabetic, is available to discuss her upcoming testimony to the House Oversight and Reform Committee on Friday, December 10th. Mindy will speak to her experience as a consumer who struggles to afford the high price of her insulin medication. More
Issues: Build Back Better, Health Care, Healthcare, Prescription Drug Prices 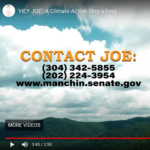 Blog Julie Archer December 6, 2021
Where and How to View WV’s New Legislative and Congressional Maps
The new legislative and congressional maps can be viewed in various formats. The maps reflect the districts for elected offices beginning in the 2022 election. Which new districts are you in? More
Issues: Elections, Redistricting, Voting 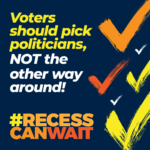 Blog WVCAEF November 9, 2021
Time to Act to Protect Our Freedom to Vote
The House of Representatives already passed sweeping legislation to protect our freedom to vote and realize the promise of democracy for all. It’s urgent that the Senate acts now to pass the Freedom to Vote Act and delivers for the American people so all our voices are heard. Together we can and will win this fight! Let’s show our senators that we demand concrete progress in protecting our voting rights. More
Issues: Democracy, Voting Rights 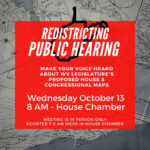 Blog Julie Archer October 12, 2021
Speak Out for Fair Districting: Public Hearing 10/13 @8AM
The Legislature has convened in special session to approve new boundaries for state legislative and congressional districts. These maps will shape our lives and communities for the next decade and beyond. That’s why it’s important to come together to speak out on fair districting so that our communities are whole and have equal resources to meet our needs. There’s still time to provide input on the proposed maps and nobody knows our communities better than the people who live in them. More
Issues: Clean elections, Democracy, Fair Representation
Previous  Next