Last month, WV Citizens for Clean Elections hosted a virtual town hall highlighting how state-level attacks on judicial independence are interconnected with the fight to protect the freedom to vote. We also discussed how these attacks on the courts impact the rights of West Virginia workers and families with state and national experts including representatives from the West Virginia AFL-CIO and the Brennan Center for Justice. You can watch the recording here.

Not only are states trying to make it harder to vote, they are also making it harder for voters to protect their rights in court. The combination of an assault on voting rights and the assault on the ability of state courts to protect the rights of voters is why we need federal democracy reforms like the For the People Act.

Attacks on the courts also include other changes made at the behest of special interests in order to limit lawsuits and make it harder for injured workers and consumers to have their day in court. In West Virginia, we are already seeing the effects of this increased influence peddling as evidenced by the Legislature’s vote to establish an expensive and unnecessary intermediate appellate court.

West Virginians deserve transparency in the creation of the Intermediate Court of Appeals. 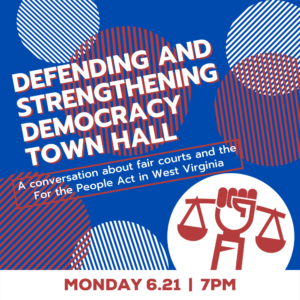