The WV Legislature’s Joint Committee on Redistricting just finished a round of in-person public hearings to allow West Virginians to weigh in on the process of redrawing the boundaries of legislative and congressional districts. But there’s still time to let legislators know that when it comes to our districts, we want a transparent process we can trust, where communities remain whole and where voters have an equal voice.

Submit your written comments here or sign up to participate in one of three virtual public hearings scheduled for September 20, 21 and 22 (see details below on how to sign up).

These new maps will be used for the next 10 years and beyond, so it’s critical that our elected leaders and the Redistricting Committee hear from us.

The public hearing being held by the Joint Committee on Redistricting are a positive first step in what should be an open and transparent process, but with the final say left to lawmakers there’s a risk they will put their political ambitions over the needs and interests of our communities.

Legislative staff is already drafting maps and taking input from legislators on their districts.  This is being done outside of the public view.  The public will not even be able to see what requests were made by legislators or why. This is a dangerous lack of transparency that allows for legislators to manipulate maps to preserve their own political power and silence certain voices.

When politicians draw maps to pick their voters, instead of the other way around, it’s called gerrymandering. Lawmakers should not be allowed to have off-the-record communications with staff, representatives of parties or others regarding how the redistricting maps should be drawn.

We must demand that the Legislature take steps to ensure that all map requests are public and that the public has a meaningful opportunity to review maps as they are being drafted. We should also demand timely disclosure of proposed maps to be voted upon, along with additional opportunities for public input before adoption.

The districts we draw this year will shape our lives and our communities for the next decade.

If you would like to speak at the virtual public hearing, you will need to use Teams (video) or call in by phone (audio-only).

To sign up to receive the link or phone number, you must call 304-357-7880 from 10 a.m. to 4 p.m. on Friday, September 17 and provide the following information: your name, the organization or group you are representing (if any), your county of residence, the email address where you would like the link and phone number to be sent, your phone number, your preference to join the hearing by Teams or by phone, and the day on which you would like to speak. If you do not register with a staff member, you will not be admitted to the hearing. You will receive detailed instructions in the email you receive after you register.

You may sign in or call into the hearing starting at 5:45 p.m.

PLEASE READ REQUIRED PROTOCOL PRIOR TO JOINING THE HEARING.

The virtual public hearing will be recorded and made available on the Joint Committee on Redistricting website.

If you are not interested in speaking but would like to watch the virtual public hearing online, or submit written comments you can do so here. 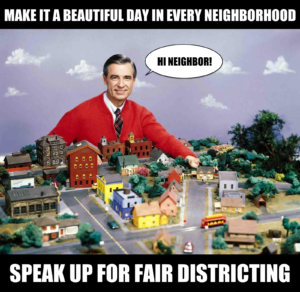