A new report from the Brennan Center for Justice and the National Institute on Money in State Politics finds that judicial integrity is increasingly under threat. A torrent of special interest money, often from secretive sources, is flooding into state judicial elections, and West Virginia is no exception. The report is the only comprehensive look at all state supreme court elections in the latest cycle, 2015-16.

According to the report, spending on TV ads reached record levels in six states including West Virginia. In 2016, a ﬁve-way contest for one seat on the state Supreme Court attracted nearly $3 million in outside spending, including over $2 million from the Republican State Leadership Committee’s Judicial Fairness Initiative. The race saw ad spending of $4.2 million, and was third in spending nationally after Pennsylvania and North Carolina.

Here’s a more detailed look at the troubling new trends identified by the report:

The report provides a thorough review of these and other trends, including examples of what big spenders hope to achieve, the kinds of ads they fund, and the threats posed to the appearance and reality of evenhanded justice.

Thirty-eight states now hold elections for their supreme courts; 33 states held elections in 2015-16, the period covered by Who Pays for Judicial Races?: The Politics of Judicial Elections 2015-16. 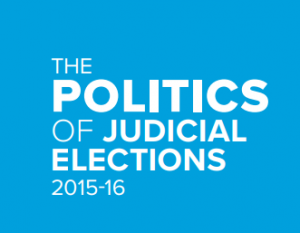