The AMP Media Project with support from West Virginia climate groups released nationally the climate action music video “Hey Joe” today, featuring crowds of people across West Virginia and beyond in a sing-a-long directed at WV Sen. Joe Manchin. (SEE bit.ly/HeyJoeVideo). “Hey Joe” (based on the Beatles’ tune ‘Hey Jude’), is written and led by prominent West Virginia singer-songwriter Ron Sowell, as almost 50 voices urge Manchin to support the climate initiatives in the Build Back Better Act before the U.S. Senate.

“The music video is an offbeat attempt to get Manchin’s attention and to bring a little musical and cultural focus to the significance of the Build Back Better Act’s sweeping climate initiatives,” said Douglas John Imbrogno of the AMP Media Project (AmpMediaProject.com), which has crafted a series of videos for the WV Climate Alliance (WVClimateAlliance.org). The song — shot and produced by Bobby Lee Messer in cities across West Virginia (with submissions also sent via cellphone) features a ‘Na Na Na Chorus’ of almost 50 people urging Manchin to support Build Back Better. Support for the video comes from WV Citizen Action Group and other climate action supporters.

“We first heard Ron sing ‘Hey Joe’ at the West Virginia Climate Alliance Halloween Rally for Climate Action, on Oct. 30 in Charleston, WV, and decided it needed an even bigger chorus than the one that joined along that day,” said Imbrogno.

“The time is now for Joe Manchin to secure his legacy and support the wide-ranging climate crisis measures bundled in this significant legislation which will help millions of people across West Virginia and America,” said Bryant.

NOTE: Ron is in Texas through Tuesday, Dec. 6 visiting family for the holidays. Call or text him your phone number  and the best time to call you and he’ll get right back to you.

CHEYENNE CARTER, 24-year-old climate activist and West Virginia native who contributes to the ‘Na-Na-Na Chorus’ (she also does some social media whispering for the WV Climate Alliance) 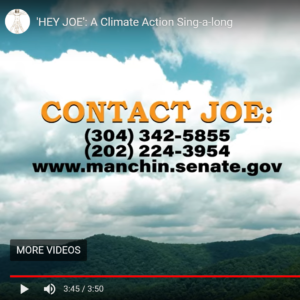